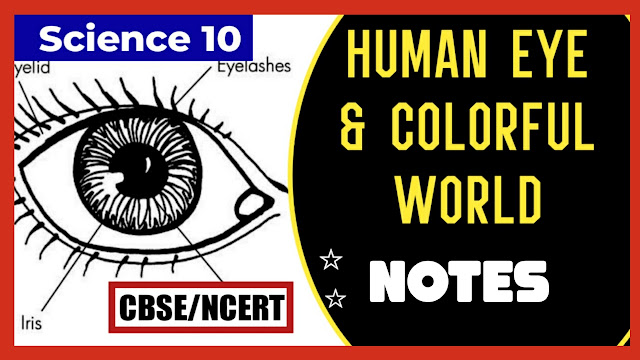 
Construction of the eyes:
The human eye is like a camera. The front part of the eye is called Cornea. It is made of a transparent substance and it is building outward. The light coming from the objects enter the eye through the cornea. Just behind the cornea is Iris which control the size of the pupil.

There is a hole in the middle of the Iris which is called Pupil of the eyes. It look black because no light is reflected from it.

The Eye-lens is a concave lens made of a transparent soft and flexible material called like a jelly made of protein. Its focal length can be changed by the action of ciliary muscles.

The screen on which the images are formed in the eyes is called retina. The retina is a dedicated membrane having a large number of lights sensitive cell called rods and cones.

The space between cornea and lens is filled with a viscous liquid called "aqueous humour".

And the space between the eye-lens and retina is filled with another liquid called "vitreous humour".

Working of the Eye:
The light coming from the object kept in front of us into the pupil of the eye fall on the eye-lens.
The eye-lens is a convex lens. So it converge the light rays and produces a real and inverted image of the object on the retina.
The retina has a large number of light sensitive cell.When the image fall on the retina, then the light sensitive salary get activated and generate electric signal. The retina sends these signal to the brain through the optic nerves and give rise to sensation of vision.
Although the image formed on the retina is inverted. Our mind interprets the image as that of an erect object.

Blind Spot: A small region of the retina where the optic nerve enter the eye ball is insensitive to light and is called blind spot.

On the other hand if the amount of light received by the eye is small ( as in the dark room ) then the pupil expands and more light enter into the eyes.

How do we see colour.
The retina of our eyes has a large number of light sensitive cells. These are the two types rods shaped and cone shaped.

Defect of vision and their correction:
The ability to see is called  vision. It is also called eyesight. Sometime the eye of a person cannot focus the image of the object on the retina property. In such a case the vision of the person become blurred and he cannot see either the distant object or nearby object clearly and comfortably. The person is said  to have a defect of vision.

These are the  refractive defect of vision because they are caused by the incorrect refraction of light rays by the eye-lens.

Myopia: Myopia is that defect of vision due to which a person cannot see the distant objects clearly. E.g.  a child having a defect cannot read the writing on blackboard clearly if he/ she on the last bench. The far point of the eye suffering from myopia is less than infinity.
Cause of Myopia: This defect is caused
(a) due to high converging power of eye-lens , or
(b)  due to eye ball being too large/ long.

👉 In a Myopic eye, image of distant object is formed in front of retina (not on retina)

Correction: Myopia is corrected by using spectacles containing concave lenses. The whole purpose of using a concave lens here is to reduce the converging power of the eye lens.

In Figure, Correction of Myopia: The concave lens placed in front of the eye forms a virtual image of distant object at far point(F) of the myopic eye.

Sample problem:
The far point of a myopic person is 80 cm in front of the eyes. What is the nature and power of the lens required to correct the defect.

Putting these value in lens formula

The near point of hypermyopia eye is more than 25 cm away. Hypermetropia is just the opposite of myopia.

In figure: In hypermetropic eye, the image of nearby object lying at normal near point N (at 25 cm) is formed behind retina.

Presbyopia: Presbyopia is that defect of vision due to which an old person cannot see the nearby objects clearly due to loss of the power of accommodation of eye.

Presbyopia occur in old age due to the gradual weakness of cilliary muscle and diminished flexibility of eye lens.

Presbyopia defect is corrected in the same way as Hypermetropia by using spectacles having convex lens.

Cataract : The medical condition in which the lens of the eye of a person become progressively cloudy resulting blurred vision is called cataract.

A triangular glass prism is a transparent object made of glass having two triangular end and three rectangular sides.

Refraction of light through a glass prism

In figure a glass prism PQR has kept on its base QR. A ray of  is light is incident on face PQ. As ray AB goes  from rare to denser medium.

Now when the ray BC strikes the force PR refraction take place again. Since the ray BC  is going from glass (denser) to air (air)

So it bend away from the normal MC and goes along the direction CD in the form of emergent ray. From the above discussion, we conclude that when a Ray of light passes through the prism it suffer two time refraction.

Dispersion of light
In the year 1665, Newton discovered by his experiment with glass prism that white light consists of a mixture of seven colour.

The splitting of white light into seven colour on passing through a transparent  medium like a glass prism is called Dispersion of light.

The band of seven colours formed on a white light is passed through a glass prism is called Spectrum of light.

The seven colour of the spectrum can be denoted by word VIBGYOR.

The rainbow is an arch of seven colour visible in the sky which is produced by the dispersion of Sunlight by raindrop in atmosphere.

A rainbow is produced by the dispersion of white sunlight by rain drops in the atmosphere. Each rain drop acts as a tiny glass Prism splitting  the sunlight into a spectrum.

We know that star emit their own light due to this, the star shine in the night sky. At some moment the stars appears to be very bright and next moment it become very dim. The twinkling of stars is due to the atmospheric refraction of star’s light. The continuously changing atmosphere refracts the light from the star by different amount from one moment to the next. In this way, the star light reaches our eyes increase and deceases continuously due to the atmosphere refraction and the star appear to twinkle at night.

Stars seem higher than they actually are

Light from a Star is reflected (bend) as it leave space (a vacuum) and enter the earth’s atmosphere. Air higher up in the sky is rarer but that nearer the Earth’s surface is denser. So, as the light from a star come down, the dense air bends the light more. Due to this refraction of star's light the star appear to be at a higher position.

For example in figure the actual position of sun is at A just below the horizon but it appears to be at position B above the horizon.

It is also due to atmospheric refraction that we can still see the sun for above 2 minutes even after the sun has set below horizon.

Scattering of light means to throw light in various random directions. Light is scattered when it falls on various type of suspended particles in its path. The blue colour of sky and the red colour of the sun at sunrise and sunset can be explained on the basis of scattering of light caused by the earth’s atmosphere.

Tyndall Effect
The scattering of light by particle in its path is called tyndall effect.

When a beam of Sunlight enter a dusty room through a window, than its path become visible to us. This is because the tiny dust particles present in the air of room scatter the beam of light all around the room.

Tyndal discovered that when that light consists of seven colours passes through a clear liquid having small suspended particle in it, then the blue colour of white light having shorter wavelength is scattered more than then the redcolour having longer wavelength. In fact the blue light present in sunlight is scattered 10 time more than the red light.

Why the sky is blue.

The scattering of blue component of white sunlight by air molecules present in the atmosphere called the blue colour of the sky.
As we know that sunlight is made up of seven colour light mixed together when sunlight passes through the atmosphere most of the longer wavelength light (such as Red, Orange, Yellow,etc)  present in it do not get scattered much by the air molecules and passes pass straight through.
The shorter wavelength blue light is however, scattered all around the sky by air molecules in the atmosphere,whichever direction we look, some of this scattered blue light enter our eyes. Since we see the blue sky light from everywhere overhead, the sky look blue.

Note: If the earth had no atmosphere consisting of there would be no scattering of sunlight at all.

Why the sun appear Red at Sunrise and Sunset.

The sun and the surrounding Sky appear red at sunrise and sunset because at that time most of the blue colour present in sunlight has been scattered out and away from our line of sight leaving behind mainly red colour in the direction direct sunlight beam that receive our eyes.

Why the sun appear white when it is overhead in the sky.
When the sun is overhead (as at noon) then the  light coming from the sun has to travel a relatively shorter distance through the atmosphere to reach us. 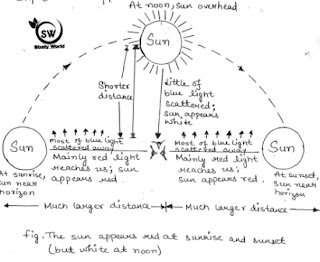 During this shorter journey of Sunlight, only a little ofblue colour of the white light is scattered. Most of the blue light colour remain in it. Since, the light coming from the overhead sun has almost all the component colour in the right proportion. Therefore the sun in the sky appear white to us. 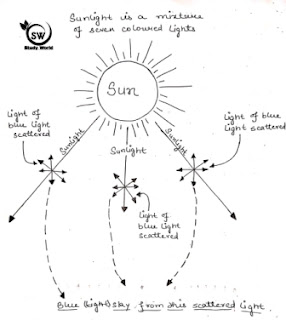 In Figure: The scattering of a light of blue light present in white sunlight by the air molecules in the atmosphere makes the sky blue.

Popular posts from this blog

May 01, 2020
Human Eye and the Colorful World || CBSE Dear Students, Today we are going to share the Intext Question of Human Eye and Colorful World. These question are very helpful for the students of Class 10 as per the latest syllabus of CBSE/State Board. We are regularly update such types of useful post for the students
Post a Comment
Read more

April 27, 2020
Carbon and its Compounds ||  Class 10 || Science || CBSE Notes  Dear Students, Today we are going to share the Notes of Carbon and its Compound. These notes are prepared by the experienced teachers. These notes are free to all the students. These notes has been prepared according to the CCE pattern of school education based on NCERT Syllabus prescribed by the Central Board of School Education for Class X. All the important topics are covered in these notes.
Post a Comment
Read more